From Knowledge Economy to Maker/Innovation Economy: Towards Student Education and Training

I recently watched an online talk on "More Innovation Through Education" given by Richard Miller (President of Olin College). Among many great things mentioned in his talk (e.g., the education-program improvement at the College of Engineering at Illinois), I especially resonated with what he presented (during 6'40''-12'03'') in one of his slides, whose screen snapshot was captured as below: 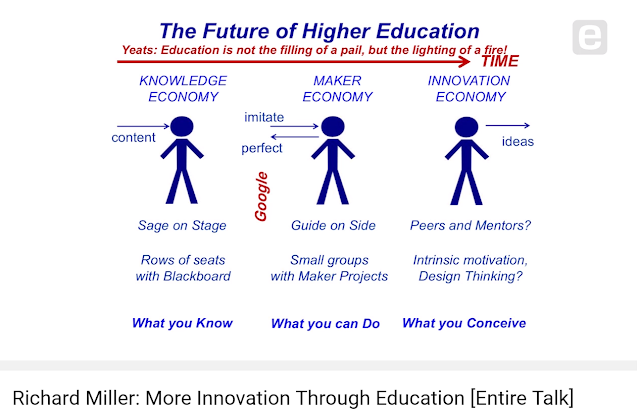 Although Richard Miller's talk seems to focus on undergrad engineering education, my discussion below centers around educating and training graduate students especially PhD students in engineering based on the points that he made on the above slide.

The traditional education focuses on the Knowledge Economy: teaching students about knowledge, making them "knowledgeable". With technologies such as Internet, Google, and Bing at hand these days, being "knowledgeable" may not be as critical as in the ancient days.

The Maker Economy is about putting What you Know into What you can Do (in 2014, the White House started the movement of "Nation of Makers"). It is related to what I often tell students: "Get Things Done". In these settings, students are given an (often well-defined) problem/requirement (e.g., a programming task or data-analysis task), and need to solve the given problem (desirably in a timely fashion). In graduate-research settings, students are often encouraged to leverage whatever attainable resources to get things done (some of these ways of leveraging resources may not be common in settings of undergrad-course assignment): reusing/adapting open source code, building upon existing infrastructures, searching at Google/Bing or Stack Overflow, getting help from and collaborating with peer students or the advisor, etc. Note that conducting a task in such settings is different from conducting a programming task in a solo homework assignment in a course where students typically need to independently write their code for the task, not allowed to reuse/adapt code from the Internet, etc.

As a concrete example, in graduate-research settings, graduate students (software engineers in industry too) may be given a programming task such as implementing a new feature upon an existing big code base. Many students may tend to take a relatively long time to understand the big code base, focusing on improving what they Know, without sufficiently focusing on what they need to get Done. Tips to Developers Starting on Large Applications include (1) don't try to understand the whole application, (2) focus on delivering immediate value, (3) important skills required to maintain large applications, (4) tools to find what to change and to find the impact of a change, (5) two caveats to the preceding tips: do not compromise on code quality and do not stop making an effort to understand the architecture. I myself practiced these tips in my past effective and efficient development efforts for tool features, i.e., Get Things Done Efficiently.

The Innovation Economy is about what you can Conceive, new products, new markets, new ideas, ... Instead of being given a well-defined problem/requirement, students need to come up with (1) what they would like to tackle, either narrowing down to a target problem when given no (even vague) problem to start with, or concretizing a given vague problem to a specific, concrete one; and (2) how they could tackle the target problem with new ideas.

In the past, I summarized five critical research skills for PhD researchers/students in my talk on "PhD-Program Preparation for Successful Post-PhD Career" and below are my mapping of these skills to the Maker Economy and Innovation Economy.
By the way, mentioned in Richard Miller's online talk (at the time of 7'20''), the Nobel-laureate economist James J. Heckman found that success can be better predicted by grit (a combination of perseverance and passion, about attitude, behavior, and motivation), much better than knowledge (how much you know). Angela Lee Duckworth's 6-min TED talk on "Grit: The power of passion and perseverance" provides a nice quick overview of grit. There are also ideas on training grit, such as 16 Learning Strategies To Promote Grit And Delayed Gratification In Students.
Posted by Tao Xie at 5:42 PM